1. At St. Capitolina Abbey, enter the building at (prt_monk 192, 170). Inside, your Party leader must speak with Friar Patrick

3. Once inside, the party leader must talk to the Falling Grave NPC to begin the quest in the Shrine (141, 221). Snatch, Teleport/Fly Wings, Safety Wall and Assumptio are disabled in the dungeon. Assumptio Scrolls can be used, however. 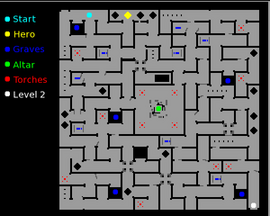 Map of the 1st Floor

Monsters DO respawn here, and give both Experience and Drops. Experience is also lost upon death on both levels of the dungeon.

4. Talk to the Falling Graves. The correct one will give a

Pendant of Spirit. Only the Party Leader can obtain and return the pendant to the Falling Grave (141, 221).

Pendant of Spirit to the first Falling Grave. The NPC will instruct you to meet him in the center of the Catacomb.

6. Now talk to the Soul of Ancient Hero in the middle of the map. He will require one representative of the party (the party leader) to get 10

Essence of Fire. He will also instruct you to gather

Token of Apostle. Only the party leader and anyone who left the dungeon during the quest needs to have a Token of Apostle to progress to the next floor. You will have 1 hour to finish his task.

7. After returning with the items, Soul of Ancient Hero will open the portal to the second floor. The portal can be found at the lower right side of the floor.

9. The Soul of Ancient Hero will tell you of seals that will weaken Baphomet. He will instruct you to go to 5 seal locations on the map. The locations are: 2 o'clock, 4 o'clock, 8 o'clock, 10 o'clock and the middle (above The Main Altar). The light blue dots show the locations of the seals.

10. Great Demon Baphomet must be brought INTO the seal and the seal must be activated to weaken Baphomet. Upon activating a seal, your party has a few seconds to damage Baphomet. The Soul of Ancient Hero will tell your party which seal to activate next. The party member who activates a seal will be Stone Cursed for approximately 30 seconds. It is during this time that the other party members must attack and damage Baphomet. The party member who activates a seal cannot activate two seals in a row. Thus, a party must have a rotation for members who will activate seals.

Upon killing Great Demon Baphomet, one of the possible drop items is a

Cursed Baphomet Doll, which is used to make the headgear,

1. After killing Great Demon Baphomet and receiving a

Cursed Baphomet Doll in your inventory: Do not talk to the Champion NPC to warp out. Use a Butterfly Wing or use the Warp Portal acolyte skill to get out of the instance map. DO NOT talk to any other NPC, AT ALL. Come back to Friar Patrick first and DISCUSS ONLY THE DOLL.

2. Speak with Rust Blackhand (prt_monk 261,91) with the following items to make a  Giant Magestic Goat.